ABOUT  THIS PUBLICATION: The Hmong  Studies Newsletter has since 2001 provided a very  consistent source of up-to-date information about new  works in Hmong Studies and  Hmong-related research resources. To access back issues of this online  publication dating back to 2001 visit: http://www.hmongstudiesjournal.org/hmong-studies-newsletter.html

Most of the Hmong Studies articles, books and dissertations listed in this newsletter and on the website  may be found at the Hmong Resource Center Library (www.hmonglibrary.org) at the Hmong Cultural Center in  Saint Paul, the largest depository of Hmong Studies academic journal  articles and graduate theses and dissertations in the United States. The library also includes a Hmong Studies Virtual Library which includes links to full-text of hundreds of Hmong-related research studies. Hmong Cultural Center also includes a comprehensive museum that teaches visitors about Hmong culture and history and folk arts. (https://www.hmonghistorycenter.org/)

Linda Gerdner. (2022). Hmong Reverse Appliqué: Cultural Meaning and Significance. Burlington, IA: Pizzicato Press. This book explores the historical significance of Hmong reverse appliqué and circumstances that led to the development of this unique textile art form. Reverse appliqué is a form of needlework traditionally used to decorate Hmong clothing. It also serves as a form of group and social identification. The book includes numerous photographs of examples of reverse appliqué. More info about this book is available here:
https://www.hmongcc.org/hmong-reverse-applique-book.html

Yang Sao Xiong. (2022). Immigrant Agency: Hmong American Movements and the Politics of Racialized Incorporation. New Brunswick: Rutgers University Press. This monograph involves a sociological analysis of Hmong former refugees' grassroots movements in the United States in the 1990s and 2000s. The author's primary focus are interrelationships between immigrant agency and state racialization practices and policies that led to the racialized incorporation of Hmong in the U.S.  The author examines socioeconomic and residential data and also assesses several Hmong social movements including efforts to help Hmong veterans naturalize as well as the community effort to get Hmong history recognized in the California public school curriculum. More info about this book is available here:
https://www.rutgersuniversitypress.org/immigrant-agency/9781978824041

Ka Lo. (2020). Performance Improvement in Risk Assessment for Hepatis A, B, and C Among Asymptomatic Hmong Patients in a Primary Care setting. PhD Dissertation, University of North Carolina. This graduate study describes a project which had the purpose of increasing hepatitis A (HAV), hepatitis B (HBV), and hepatitis C (HCV) risk assessments in adult Hmong patients, using the USPSTF’s 2014 HBV and 2013 HCV recommendations and the Centers for Disease Control and Prevention’s (CDC’s) HAV and HBV immunization recommendations. The project used evidence-based interventions and the Diffusion of Innovation and Culture Care Theories.

Sou Lee. (2020). Menyuam Laib: Entry, Persistence, and Exit Among Hmong Gang Members. PhD Dissertation, Southern Illinois University. This graduate study utilized life-history interviews and ethnographic observations with 34 current and former Hmong gang members from California, Minnesota, and Wisconsin to discover the motivations and methods associated with entry, persistence, and exit. Overall, the author's findings were similar to much of what has been documented among other racial and ethnic gangs; that is, participants expressed similar reasons for joining, staying, and leaving. However, the also indicated that Hmong gang members showed a greater level of bonding—an observation that has also been noted among Vietnamese gang members.

Natsuko Kobayashi, Chaloun Bounithiphonh, Phonevilay Sichanthongthip, Chanhsamone Phongoudome
and Motoshi Hiratsuka. (2022). "Acceptance of New Land-Use Activities by Hmong and Khmu
Ethnic Groups: A Case Study in Northern Lao People’s Democratic Republic." Forests. 13(8): 1-11. The authors of this article note that reducing emissions from deforestation and forest degradation (REDD+) to address climate change has historically included little evaluation of how heterogeneous local communities respond to REDD+ interventions and new land-use activities. In this research study, they assessed differences in the acceptance of new land-use activities as a function of livelihoods of the Hmong and Khmu ethnic groups in northern Lao People’s Democratic Republic, where REDD+ was implemented between 2011 and 2018. Our socioeconomic data, collected by a questionnaire-based survey and focal group discussions, showed that the Hmong more effectively incorporated support from REDD+ than the Khmu because the Hmong owned grazing land.

Seb Rumsby. (2022). "Historical Continuities and Changes in the Ethnic Politics of Hmong-Miao Millenarianism." Asian Studies Review, 46(2): 234-253. The author of this article provides a comprehensive timeline and mapping of past and present Hmong-Miao millenarian activity highlighting several enduring features including a context of economic and political crisis, their transnational nature, the prevalence of manipulation and/or coercion, and specific cultural symbols within supernatural predictions. The author also assesses their historical developments, from pan-ethnic to mono-ethnic and from violent to peaceful (but still threatening to political and religious authorities), reflecting historical trends of ethnicisation and territorialisation.

Teresa Toguchi Swartz, Douglas Hartmann & Pao Lee Vue (2022). Race, ethnicity, and the incorporation experiences of Hmong American young adults: insights from a mixed-method, longitudinal study, Ethnic and Racial Studies, 45(7): 1197-1217. Utilizing the lens of racialized incorporation, this paper incorporates three
decades of surveys and interviews to analyze the initial experiences of young adult Hmong migrants in the United States. The first part describes the aspirations and understandings of these young adults as adolescents (circa
1989–1994). Early in resettlement, they, like their parents, stressed education and mobility; however, in contrast to traditional assimilation theory and model minority stereotypes, their aspirations were oriented toward family,
traditions, and ethnic identification. The second portion of the article (2002–2007) documents how the research informants developed a bicultural identity during the transition to adulthood even as they became increasingly aware of its tenuousness, the ongoing constraints of racism, and their own status in American racial hierarchies. 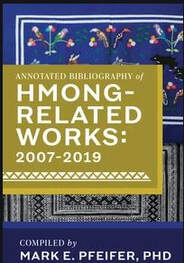 Annotated Bibliography of Hmong-Related Works: 2007-2019 has been published by HER Publisher. The book includes annotations of more than 600 Hmong Studies research publications along with author and subject indexes. Order this unique research reference book here: https://herpublisher.com/collections/frontpage/products/annotated-bibliography-of-hmong-related-works-2007-2019
COMPREHENSIVE  AND EXPANDED HMONG STUDIES RESEARCH BIBLIOGRAPHIES ARE ONLINE:

A 2007-Present research bibliography is updated every few months with information about the latest research publications in Hmong Studies, online links to full-text are included where applicable:
http://www.hmongstudiesjournal.org/hmong-studies-publications-from-2007-present.html